"Il Bisonte is the star of a film that I shot by cutting and sewing cowhide". For 50 years Il Bisonte has been telling a story through its products, a story of passion, tenacity and originality. A story that justified the will and energetic determination of its founder, Wanny di Filippo who was able to transform his dream into what is today a company that exports worldwide and represents one of the most exclusive leather brands made in Italy. 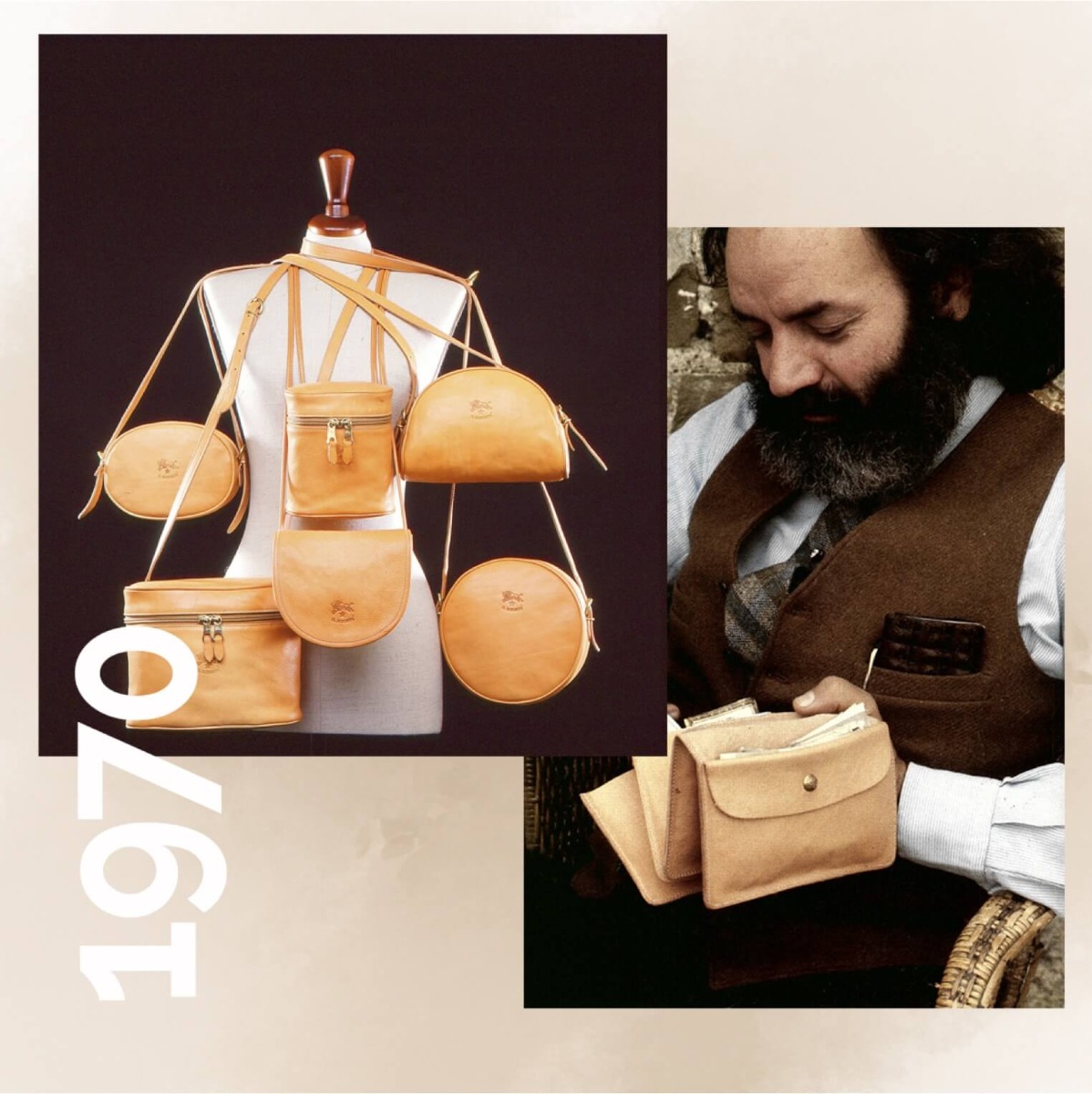 “If I designed them, I can make them!”

The first fifty years of Il Bisonte are intertwined with the biography of its founder Antonio di Filippo, known as Wanny. Born in Veneto, Wanny shows great propensity at an early age for creativity, but his father pushes him to enroll in a technical institute. Wanny doesn’t complete his studies. Instead he is hired as a mechanic’s apprentice and cultivates his passion for art through correspondence painting courses offered by a Parisian school.

As an auto parts sales rep, he makes frequent business trips to Sardinia. There over the weekends, in full hippie spirit, he weaves leather and creates bracelets and belts that he gives to friends. He shows his creations to a company that declines to produce them claiming they’re too original and technically unworkable. Wanny is undeterred and decides, with his wife Nadia, to produce what he has designed.

A basement in the heart of Florence houses Il Bisonte’s earliest headquarters. The first people to buy his bags are Florentine nobles living in the area, and passing tourists (including Ralph Lauren). Others arrive shortly thereafter thanks to word of mouth.

The name of the brand arrives with its first customers. It is Wanny himself who chooses it in honor of the animal he’s always considered his totem: a symbol of strength and docility, of courage and resilience. He also designs the logo, though his first bison is so placid it looks like a cow. Ten years later, in 1980, he redesigns the animal’s profile and adds a star, shaping the brand into what still characterizes all its creations today.

Wanny throws himself passionately into his craft. In 1972 he takes part in Pitti Immagine Donna and enjoys extraordinary success. In 1973 Il Bisonte headquarters move to Palazzo Corsini in Via del Parione, where the offices and showroom are still located today. Luciano, then sixteen and now head of the factory, starts working with him.

These are years of great creative excitement and buzz. Nadia launches her shearling line and Wanny designs some of Il Bisonte’s timeless icons such as the transformable Caramella (1973), Maremmana (1974) and Vagabonda (1976) as well as the first backpacks. 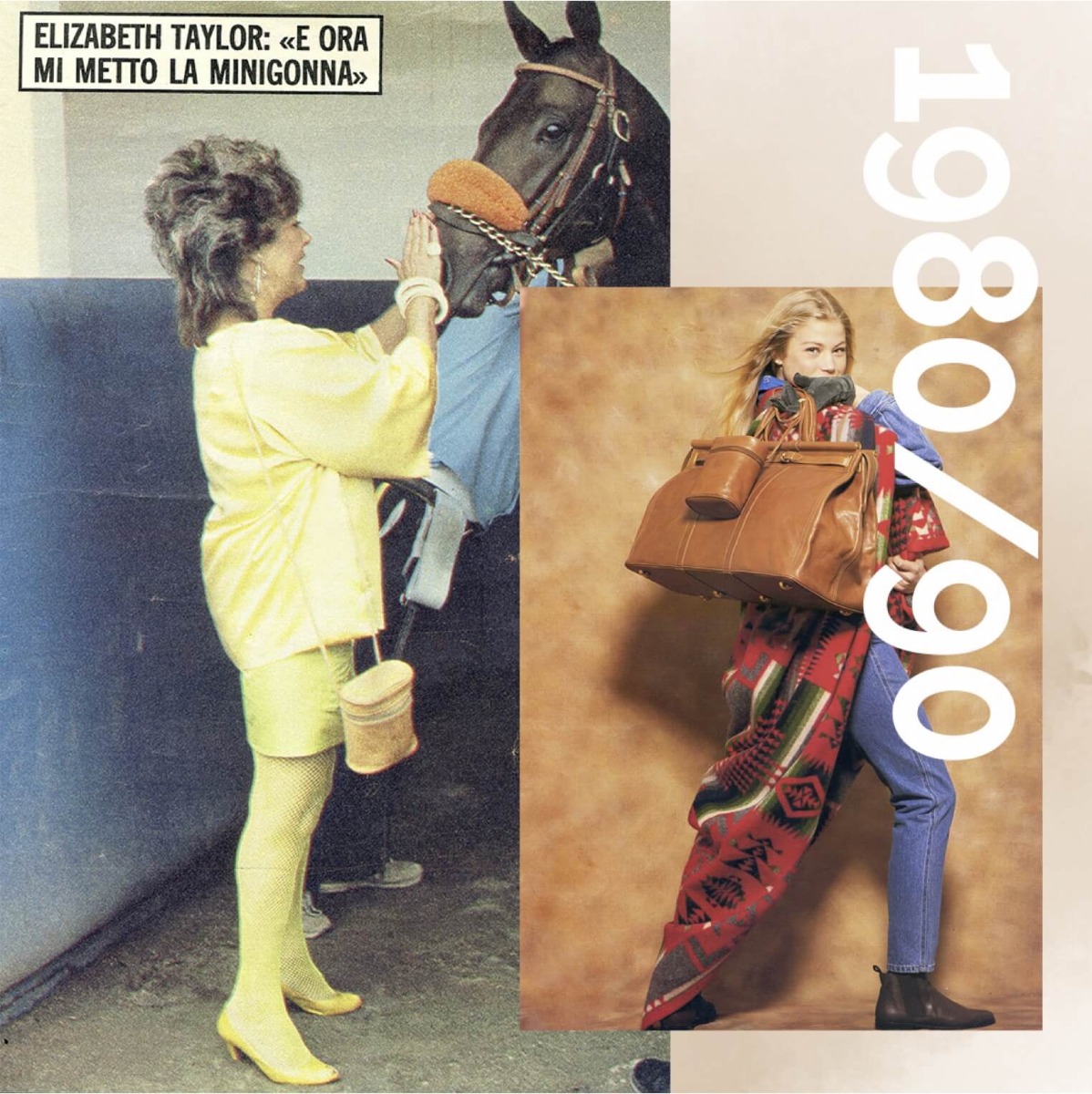 “I had to push myself to the ends of the world and beyond limits, working with my hands and believing in my ideas, like a diviner holding an olive switch and feeling the pull of water.”

There are many Americans among the first customers to the Florence store, but it’s not until the early ‘80s that Il Bisonte begins to make an appearance in the most famous stores in New York and Long Island, such as Barneys, Bloomingdale’s, Bendel, Macy’s, Ann Taylor and Trees.

In 1984 the first single-brand stores were opened in Paris (inside the Galerie Véro Dodat on the Rive Droit) and Milan (in Via della Madonnina, in the heart of Brera).

As sales grow so does the company: in 1985 the offices in Via del Parione expand to include a factory in Pontassieve, a town located in the heart of the Florentine leather district.

In 1986 a second Parisian shop opens in Rue de Cherche Midi, on the Left Bank and in 1987 Il Bisonte’s sign also lights up in New York City, on Thompson Street. 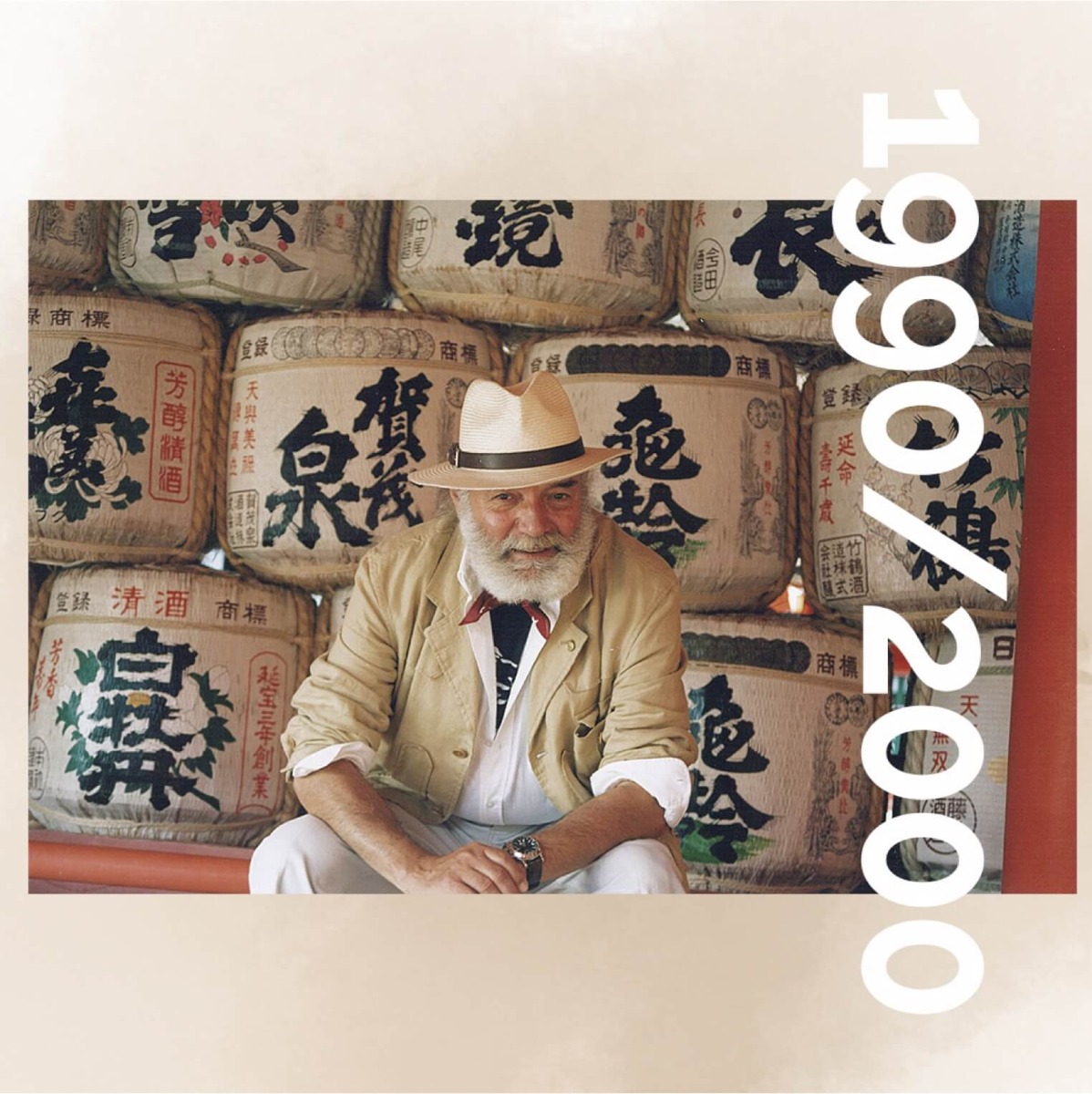 “I saw that our style is appreciated by people who love objects that have their own personality.”

The great Japanese adventure begins in 1999 when the first of 38 stores opens in Kyoto. Thanks to their unmistakable style, Il Bisonte and its founder Wanny, immediately become true icons of Made-in-Italy style.

Meanwhile, in the province of Florence, Il Bisonte’s 30Km production chain takes shape: thanks to solid relationships built over time with the best craftsmen and suppliers around, the brand’s top quality supply chain remains rooted in the heart of Tuscany, at the center of a territory that has been producing the best leather and fabrics in the world for millennia. 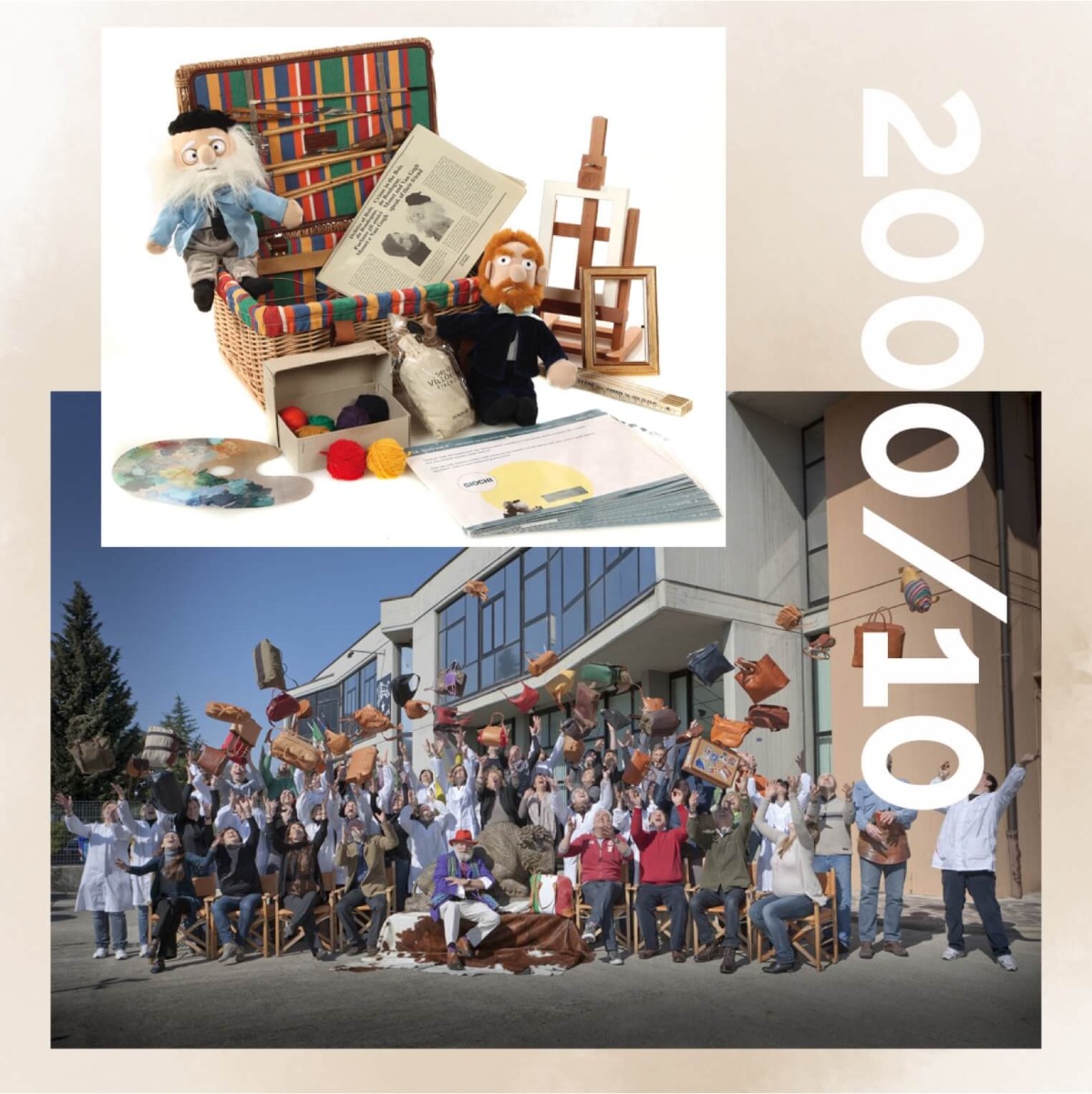 In 2001 the Pontassieve production plant expands and moves to Via Lisbona, where it is still located today.

In 2003, in tribute to the area where the company was founded and grew, Il Bisonte begins to back the San Casciano Azzurra Volley women’s volleyball team (now Il Bisonte Azzurra Volley) as its main sponsor; the team has played in Series A since 2012.

In 2008 the second single-brand store opens in Rome, in Via dei Coronari.

That same year, a collaborative project begins which has for the past twelve years linked Il Bisonte to Palazzo Strozzi, the most prestigious Florentine exhibition venue featuring modern and contemporary art. For each show, Il Bisonte creates a Family Kit bag, a small finely crafted work of art that helps both young and old visitors learn about the masterpieces on display.

Art world adventures have continued since 2017 with the Piera bag and an entire line of leather accessories created by Il Bisonte specifically for the Brera Academy.

“Il bisonte’s creations (…) are minimalist shapes styled for man, that patinate with light and bear witness to the passage of time.”

In 2010 Il Bisonte celebrates its fortieth anniversary with events in Italy and Japan, and launches its first online store.

Between 2012 and 2018 the brand consolidates its presence in the Far East, opening its first single-brand store in Seoul, three stores in Jakarta and three stores and a pop-up in Hong Kong, in the prestigious IFG and K11 malls.

2019 marks the great return to New York, with the inauguration of the Bleecker St. boutique.

In July 2019, on the eve of celebrating its fiftieth year in business, Il Bisonte is purchased by its historic distributor, Look Holdings Inc., a company listed on the Tokyo stock exchange.